What is a Ranch Rodeo?

Ranch Rodeo cowboys make their living everyday working for the cattle producer, be it in the Big Bend of Texas to the Mountains of Oregon to the Flint Hills of Kansas and to the Rocky Mountains of Colorado.

We feel there is nothing better than “riding for the brand” (the ranch we are employed by). Difference is, when the ranch rodeo is over, the same cowboys who competed against each other will be gathering cattle with each other the next day. In the ranch rodeo arena they are competitors, but outside the arena they are doing the same thing----living the working ranch cowboy lifestyle, preserving the working ranch heritage and passing the tradition on.

It is a passionate and loyal occupation, with very extreme elements of survival. The working ranch cowboy is a very loyal, gritty individual, with the survival skills to adjust to the extreme hazards that come with the occupation.

The working ranch cowboy’s everyday life isn’t measured in seconds or standings, it is measured in horsemanship, stewardship and heritage.

A pro rodeo cowboy may have grown up on a ranch or might even live on one now---but he makes his living rodeoing, not ranching.

In 1995, a group of people from across the western United States created the Working Ranch Cowboys Association. It exists to celebrate and preserve the working ranch cowboy lifestyle and the WRCA sanctioned rodeos exist to give these cowboys a forum to show off their skills. The champions of each sanctioned rodeo earn an automatic bid to the WRCA produced World Champion Ranch Rodeo that is a means to showcase the skills of the working ranch cowboy and to raise funds for the WRCA Foundation.. 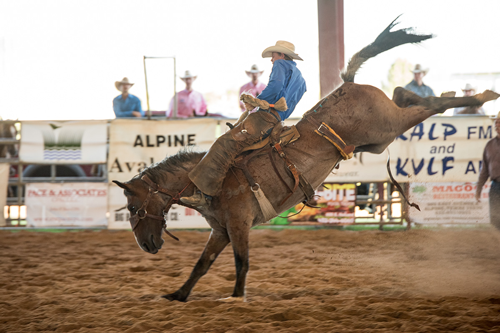 “Ride as ride can” for 8 seconds. One member from each team will be required to ride a bucking horse in a working ranch saddle and one-rein halter (no PRCA rigging allowed).

Points will be awarded for the difficulty of the horse and also for the degree of aggressiveness, control and exposure demonstrated by the rider. (This one gets nasty!)

Four men from each team have two minutes to sort out five head of cattle from a herd. These cattle must be sorted in numerical order based on a starting number called out by the announcer as the team approaches the starting line. The time begins when the first rider crosses the start line. Example: If 4 is called, cattle to be sorted will be 4,5,6,7,8. 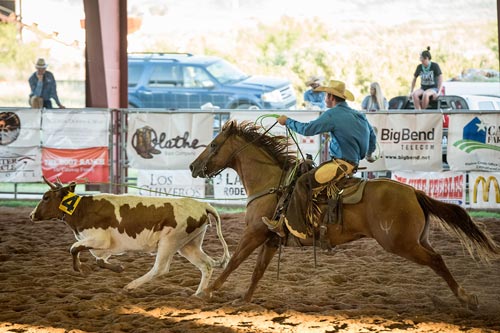 Four horseback members from each team must pick one numbered animal from a large herd, rope it, and place a non-toxic paint mark between the animal’s eyes in less than two minutes. As riders approach the line, the announcer will call a number that has been drawn for them. Time begins when the first rider crosses the line. Without loping into the herd, a numbered yearling must be cut out from the herd and driven across the start line, before it can be roped.

All contestants may rope, however the vet's rope must be off the saddle horn and clear of the horse before the vet dismounts. Failure to do so will result in DISQUALIFICATION. Loping in herd will result in a 30-second penalty. If the yearling gets back across the line before it is roped, roper may not chase it through the herd, bust must slow down and cut it out again. More than two head  across the line as the roper cuts his yearling out will result in a NO-TIME. Ropers may rope either head or heels. The cutter must throw the first loop. Failure to do so will result in DISQUALIFICATION.

The steer must be standing when it is headed and/or heeled. Steer must be headed first. If the steer is caught by one horn, the roper is not allowed to ride up and put the rope over the other horn or head with his hands. The steer must be lying on its side prior to doctoring. All four feet must be visible. When steer is on its side, vet will place a mark between its eyes and raise his hands, stopping time. Mark must be between its eyes or will result in no time. (This one is a ranch necessity!) 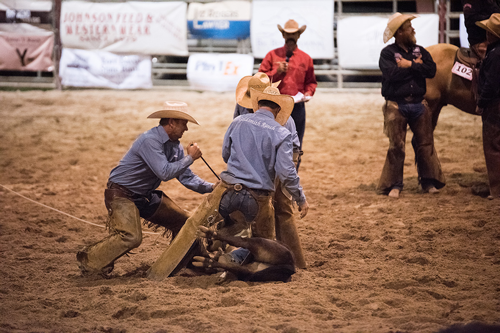 Up to six members, including a roper, two flankers, a brander and two herd holders, from each team can compete here. Two teams will compete at the same time and they each have two minutes to rope, throw and mark with non-toxic paint, two calves each. The ropers will start together. Time begins when they cross the line.

After the calf is flat on its side and the rope removed, the branding iron is removed from the bucket, the calf branded on its ribs on either side, and the iron returned to the bucket after branding each calf. The brander may help flankers remove the rope, however the iron must stay in the bucket until the rope is removed.

Time stops when branding iron is in the bucket after the second calf. After a calf has been branded, he must return to the herd before he can be roped again. If 2 calves are roped and dragged to the fire, one of them must be released and allowed to return to the herd. The winner is the fastest time on two calves. (This one is exciting!) 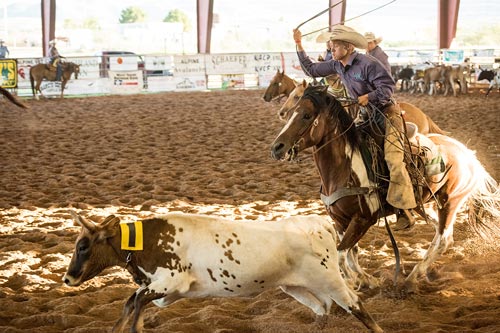 Four members from each team, including a roper (who is horseback), milker and two (2) muggers, will be required to rope a cow and milk her in less than two minutes. Catch as catch can, but the cow's head must pass through the loop. Rope must be off the saddle horn before the milking commences (failure to do so will result in a NO-TIME) and off the cow before time is flagged.

The muggers hold the cow with help from the roper, while the milker milks her into a standard 12oz longneck bottle. The cow must be standing to be milked. Any one of the contestants may milk the cow.